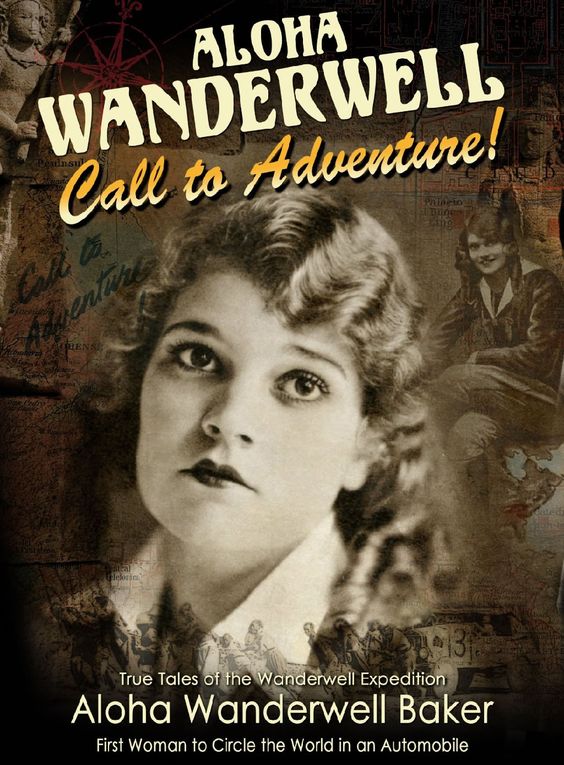 THE MOST TRAVELED GIRL IN THE WORLD

Have you heard of Aloha Wanderwell? No? Neither had I. Then I started reading her memoir, A Call to Adventure, and I thought … how in the world did I not know about this person?
Aloha was an explorer, filmmaker, actress, vaudevillian, aviatrix, author, and essentially, the model for my alter ego, Page Turner. She shot to stardom in the 1920’s and 1930’s, but for a woman who was dubbed the “Amelia Earhart of the Automobile,” most people know very little about her. Time to fix that!
Aloha, born Idris Galcia Hall in Winnipeg, Canada in 1906, was a tomboy who longed for excitement. She found it at just sixteen when she came across an ad in the Paris Herald that read:

Idris, who was fluent in French, Spanish, Italian, and spoke some Russian, Chinese, and Japanese, landed the job. When she joined the expedition in 1922, Walter “Cap” Wanderwell, the expedition leader (and her eventual husband), gave her the stage name Aloha Wanderwell.
Although Aloha began as a secretary and assistant, she quickly became both the star and director of the films taken throughout the expedition.
Traveling in a small caravan of Model T Fords with Cap, a camera crew, and a pet monkey named Chango, she trekked through 43 countries and four continents.
Aloha Wanderwell lived a life filled with amazing experiences and fantastic adventures. I’m inspired and awed by what she accomplished at a time in history when most woman were constricted by society and circumstance.
But, it’s more than that. I like to think of myself as an adventurous person.I spend a lot of time in the car traveling from story to story just like Aloha. Okay, my car has air conditioning, armrests, GPS and satellite radio, so maybe it’s not exactly the same. But the next time I complain about the miles or get a little whiny because the highway rest stop doesn’t have Earl Grey tea, I’ll think of Aloha in her Model T, traveling the world with her camera, her breeches, her spirit of adventure, and her monkey.
Hmmm … maybe I need a monkey.
To find out more about this fascinating woman, visit: www.AlohaWanderwell.com